Skie can be found outside the southern wall of Dragonspear castle. We rescue her from some crusaders. She seems hellbent on making a name for herself to get out of her father’s shadow.

We should report back to Marshal Nederlok that she is safe. 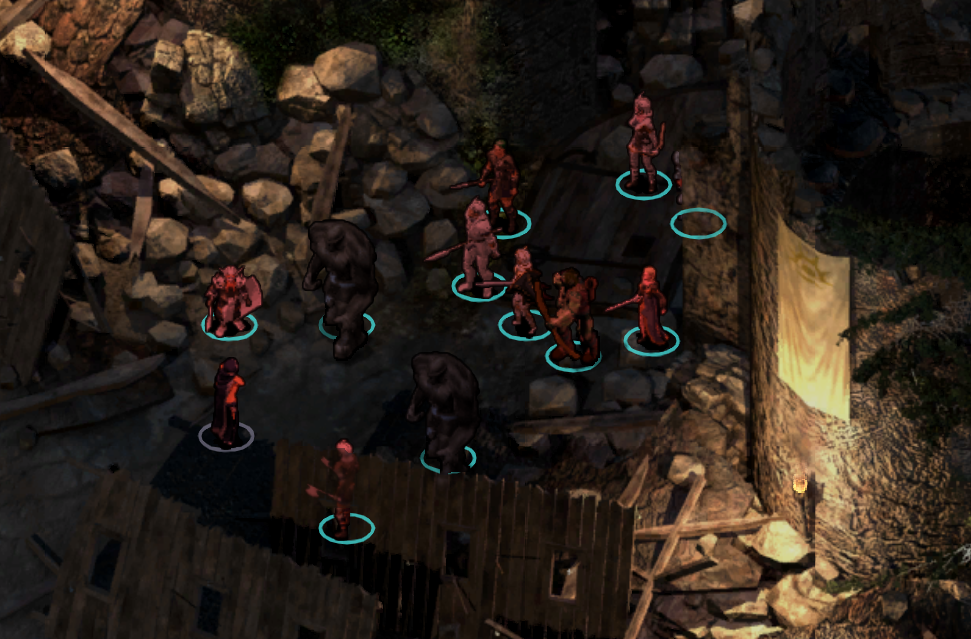 Unless we can persuade them, the wardens at the castle gate will demand to see a Seal of Caelar before allowing us entry into the courtyard.

We can explore the Dragonspear Castle’s courtyard as long as we are cautious. Revealing we are the Hero of Baldur’s Gate or mentioning our camp (i.e. not the crusade’s camp) will result in the predictable response of the crusaders all turning hostile.

Valis has accused Corinth of betrayal against the Shining Lady. We can offer to mediate this squabble if we choose.

Inform Leopas of our judgment.

Tristian [On the Fence]

Tristian is on the eastern edge of the courtyard. We will need to obtain a Coroniir board from Mizhena at the coalition camp to challenge him.

Battle Standard [On The Fence]

Just west of Commander Dreon is a box containing a Battle Standard.

Dreon [On The Fence] 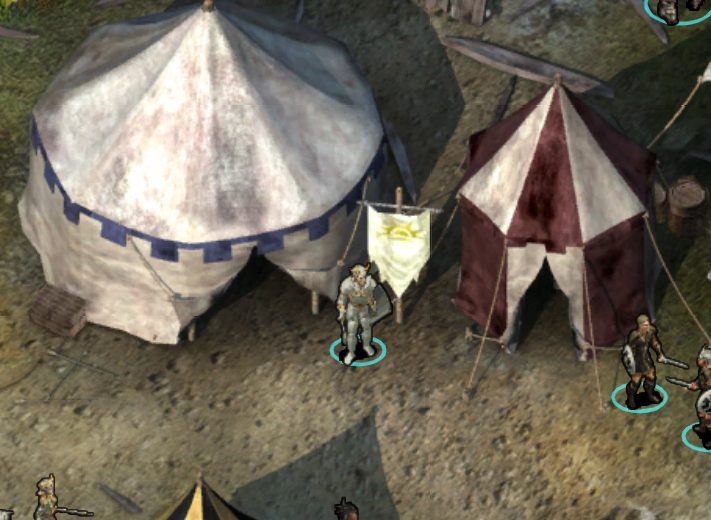 Commander Dreon has little to say to us, especially if we are not in uniform.

Token of Faith [On The Fence]

Deneld speaking to a group of recruits.

We can pickpocket crusader recruits until we find a Token of Faith.

Map [On The Fence]

The crusader map is just laying on the ground because that’s where they put their important maps. They did think enough to put a lone crusader to guard the map.

Return to Waizahb at the coalition camp once we have the five items she seeks.

Crusaders Nan and Pedro want us to help their friend, Sallo, who is passed out drunk. I need to get some wine and a report from Deneld and then bring both items to Commander Dreon (this also requires us to wear the Crusader Uniform).

Report to Dreon with the Morning Report and Full Wineskin, then speak with Nan & Pedro again (6000 xp, two potions).

This heavy slab displays the holy symbol of Tempus.

Recruits Kjarvan and Qing are hoping to restore a stone icon and receive a blessing from Tempus. I should look for icon fragments in the rubble to the north and talk to Morale Officer Deneld.

Return to Kjarvan and Qing with the Sanctified Shards.

Deneld wants us to speak with crusaders around the camp to learn more about the crusade.

We need to find the Troll Shackles somewhere in the camp for Sindret. She is a servant of Shevarash, a drow hunter. She will not talk to us if we have Baeloth or Viconia in our party and may even turn the camp hostile against us.

Editor’s Note: With my sorcerer, I was unable to find a non-violent solution, even with [Cha] & [Str] modifiers.

Corwin seizes up at the sight of her former lover and Rhoma’s father, Beno Famari. We can either give Beno a wide berth or talk to him to get information on the crusade.

This encounter can provide information on Corwin’s past, but there’s nothing earth-shattering to be learned. If we kill Beno, a crusader commander will ask us what happened. As long as we don’t threaten him, he’ll tell us to get rid of the bodies and we’ll avoid turning the entire camp hostile.