Entering the dig site we come across Brother Auchlin Deepvein and three of his dwarven clerics holding back a horde of undead. Once we end the threat Deepvein tells us the undead were unleashed after they tunneled into a room of books and undead. His friend, Gurn Coldhearth sacrificed himself so the other dwarves could retreat. He will offer us a reward if we can find Coldhearth’s remains.

Should any of the dwarves fall when fighting the undead they will drop an Amulet of the Keeper of Secrets Under the Mountain. Pick any we find up and keep them safe in our inventory so they do not despawn while we’re exploring the dig site. There is one at the end of the southernmost tunnel.

The only living being left at the dwarves abandoned campsite is the giant, Semahl. Gurn Coldhearth’s warded chest is on the western side of the camp. We are currently unable to open it. 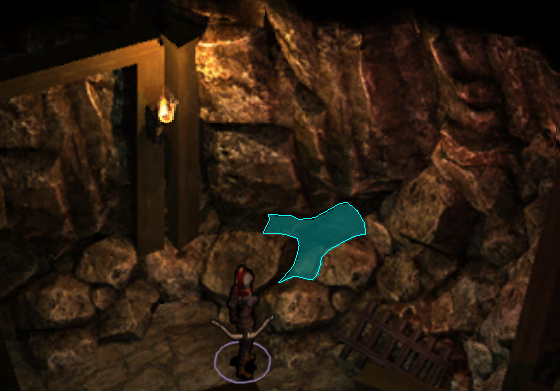 Crommus’ resting place is well-concealed beneath a pile of rubble. You might never have found it had he not told you where to look.

The grave Crommus mentioned is in the eastern part of the first level. You must have activated the six menhirs or it will not show up. (Star-Strewn Boots, Crommus’s Capelet, Bard Hat & Tangled Strings).